Isn't this pretty??  Lyn took a class to learn this technique and then decided it just wasn't for her. I think its beautiful!! 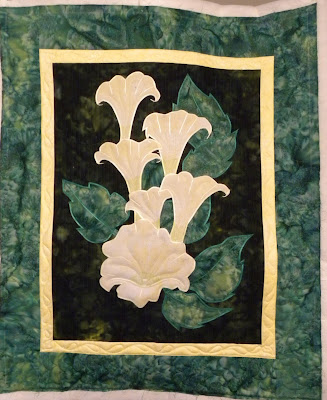 If you like it as much as I do, she'll have it for sale at the Portola Quilt Show in April!!

Here's a peak at the back: 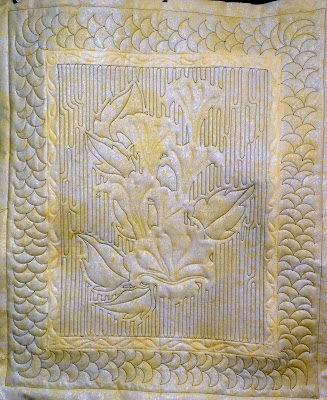 A friend of mine from Quincy sent this one--although since Lynn is living in Tennessee now, I guess I have to say my friend from Tennessee sent it. The combo of the wool on the black makes this one awesome Baltimore Album! Unfortunately, I don't have the best set up for photographing the entire quilt, so this pic does not do it justice!! 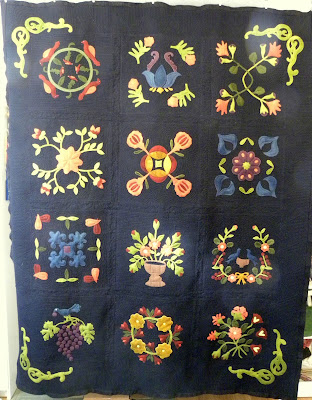 You'll notice that some of these pics, like the one below, looks to be at an odd angle. It is--I took the pic while the quilt was still loaded and used my quilting light (just made by my husband) to shadow the picture. Quilting black on black is enough to make your eyes go buggy, so Dennis made this light much the same as Jamie Wallen's tute. What a livesaver!! 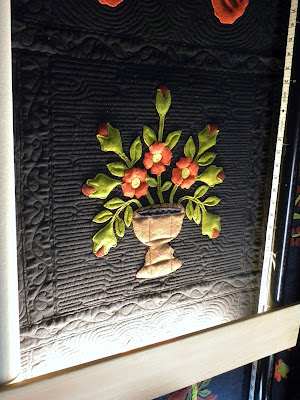 When I have a quilt with so many individual appliqued blocks, I try to use several designs when quilting them. I usually stick to three and use them interchangeably to add interest and yet keep the continuity. This one has a bit of pebbling and McTavishing. 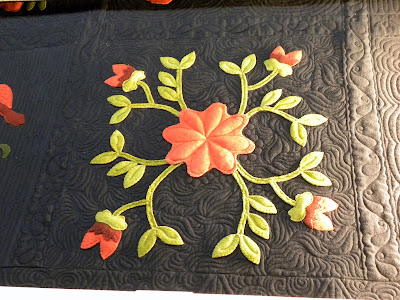 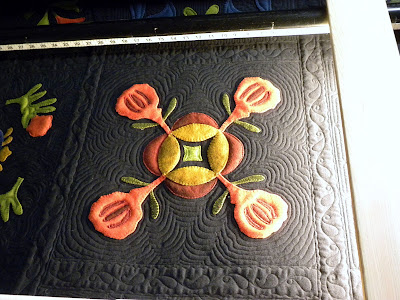 Some straight lines with the pebbles here. 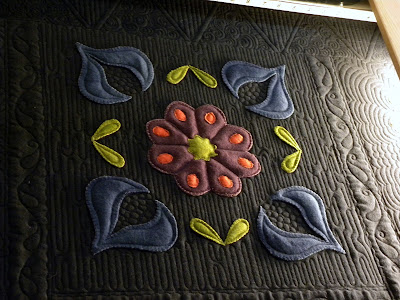 More pebbles and a bit of echoing. 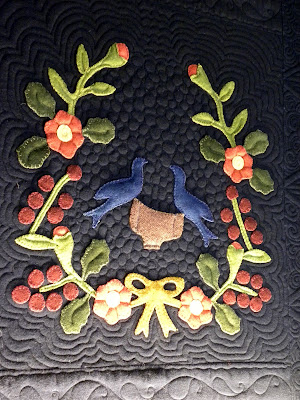 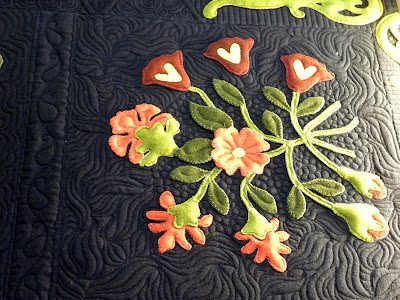 And finally a couple pics that show the border design. 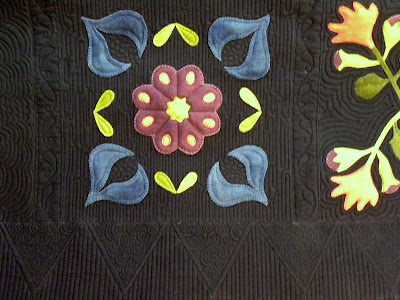 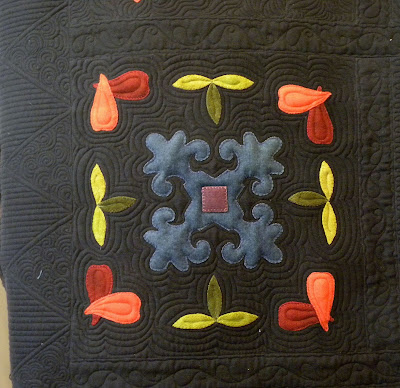 Posted by Crazy Horse Quilting at 5:00 AM 1 comments

I was given the honor of quilting this Opportunity Quilt for the Cabin Fever Quilters Guild. This is the third one I've done for them and I'm always so pleased when they ask. Its a real compliment and I so appreciate it.

This quilt is just stunning--and appropriate. The name: Cabin Fever Quilt! It was from a pattern in Primitive Quilts (the magazine) and then the ladies putting it together added some blocks to make it larger. I love how it turned out! 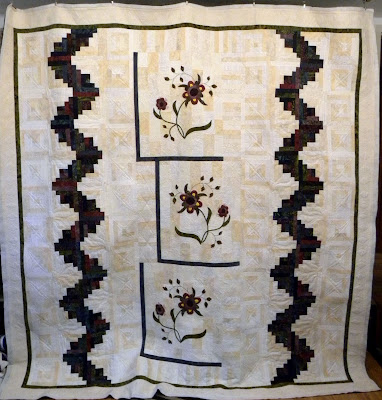 I had originally planned to quilt this much the same as the magazine, but those extra blocks made me rethink it.  Following are many pics of this quilt showing the line work and fill behind the applique. Remember, for a close-up of any of the photos, just click on it. 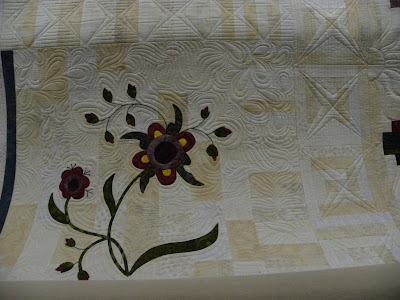 Don't you love the "suns" with the darker log cabins?  I wish I could take credit for that, but alas, I can't. That was the only design in the original quilting that I used and will use again.  It was perfect with those log cabins! 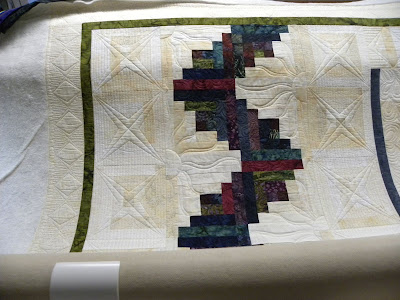 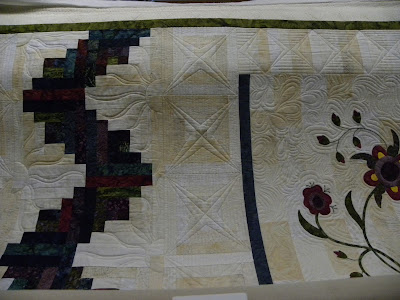 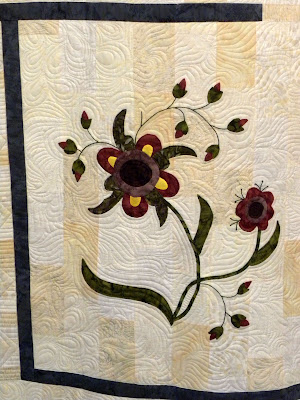 The hardest part for me with this quilt was the backing fabric. I quilted this whole thing with the same cream colored thread (So Fine--I love that stuff) top and bobbin. The problem??  The backing was a dark gray--almost the same as the frame around the applique. I thought about using a gray in the bobbin, but any little bit of that gray showing through on the top or the cream on the back would have made me crazy! Instead I opted for all cream, so that means the back is almost like a whole cloth--albeit by a crazy quilter that doesn't know the thread is supposed to match!!! 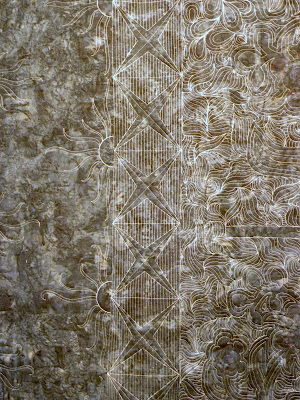 Not sure why the gray fabric is so yellow in this pic, but you can still see the quilting. 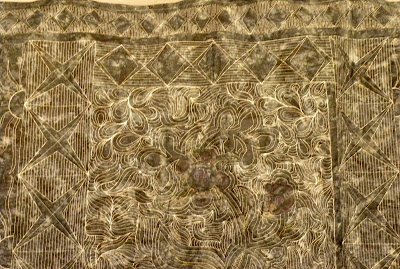 Dory
Posted by Crazy Horse Quilting at 5:00 AM 0 comments

Labels: Customer Quilts, Opportunity Quilt
Newer Posts Older Posts Home
Subscribe to: Posts (Atom)
Notice the painting in my header?? This one is called "Big Butt" and is by Leslie Ann Webb. Click here to read about Leslie and see more of her work.